The Cry of the Hyena 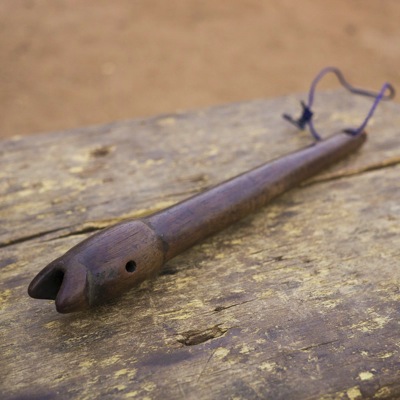 Once upon a time a hyena came to feed at night in Karankasso, in a hole under the tall trees I see from my house. She brought her cubs to eat the earth men dug out of the hole. One night, she was left without her offspring. According to a version, they were killed by the hunters, or according to another version they starved to death. The hyena started to cry, and villagers were scared by the howl. A karamogo, a teacher of Quranic studies, provided the correct interpretation of the hyena’s cry: she was saying she would leave the village, but if villagers wanted rain to fall again they had to perform a saraka, a ritual offer. The saraka is called in Seenku Kurusa, which means the cry of the hyena (kuru). It is always in February, once a year. Children walk around the village at night, humming: “MMMMI!”, the cry of the hyena. They ask for food, with a refrain that goes: “A child told me he is going to kill me. So I will eat the tomso and the faro of the hyena”. Both tomso and faro are food prepared with bean flour, one fried and the other boiled. The following day, people dust their houses early in the morning and gather the dirt in a gourd, along with some tomso and faro. The content is left out of the village, to the West. On this day It is forbidden to go out of the village in that direction, but once the whole bush used to be a no-go zone. “Mogo ti ta kungora”, I was told in Jula, people don’t go to the bush. The purpose of the saraka and of the hunt that is connected to it is to keep away a bad wind that is said to come in February, bringing many illnesses and deceases, and to propitiate a good rainy season and consequent abundant harvest.

The big hunt (in Seenku Tèen) is normally announced for the day before the next market day (the Sambla week is made of five days). Different neighbourhoods hunt on different days, on alternated days. Early in the morning of the day of the hunt, a whistle is blown to announce the hunt. For my neighbourhood, Gwogun, it was my friend Lasso’s father to blow the whistle at 6 o’clock on February the 15th. I recorded one version of the myth of the hyena from his voice, that morning. Once blown, they give the whistle to a boy, who goes to sit in the place, at the margin of the village, where men will gather to go hunting. The whistle should not remain in the village. Women must not face up to the place of the gathering, nor go into the bush in the direction hunters will take. Men, boys, elders bring shotguns, wooden throwing sticks, slings, dogs, anything. They decide the direction to take, and spread on a long line. They use voice to coordinate, and game is hunted out and cannot escape. I filmed on the 13th and participated as a hunter on the 15th. I was amazed to see how many hares can be found by such a big group, and realised that having a shotgun in this kind of hunt is not exactly an advantage. You have more possibilities to kill something with a stick and a dog. I also noticed the sharp contrast with the individual or small group hunt I was used to, from the acoustical point of view. The tèen is not nearly as silent, the aim is to hunt out your prey and voices and whistles are important to coordinate at distance, for example to warn your neighbours of the direction a hare is taking.

The hunt goes on roughly for the whole day, depending on the presence of animals. The day I participated we walked for 6 hours stopping just for 5 minutes to drink from a pit, covering some 25 kilometres. You keep what you get, there is no sharing of the prey, which is sometimes contested. But you should give some meat to your father. There is no special role for donsow in the hunt, just it is recommended that those with a shotgun walk in front of the crowd, to avoid accidents. Once, I am told, there used to be wrestling among young people, before leaving for the hunt. Those who had success whould have a successful hunt as well. There is also a similar ritual for women, with fishing: it is called saansegè (refers to fishing in general). It takes place during the dry season, and many women have the long basket used to fish even if they don’t usually do it, they use it once a year.

I think the myth of the hyena and the ritual of the kurusa saraka, along with the collective hunt, will reveal very important for my research. There are many revelatory symbolisms concerning the relationship of man and the bush, but first of all the ritual puts in direct connection hunting and agriculture, making the former necessary for the latter. I had perceived such a connection in village life itself, but now I have something to support it. I realised this video to make a summary of the ritual, and perhaps the soundtrack is here more relevant than the images, for once.

5 comments on “The Cry of the Hyena”