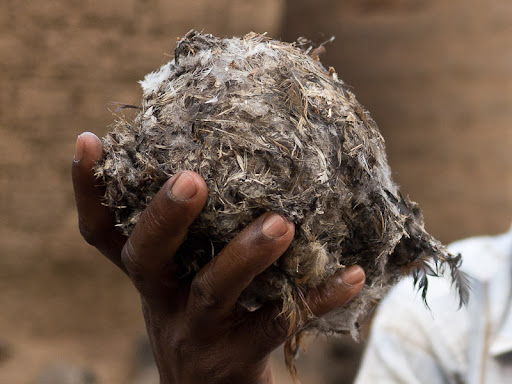 When asking about the tèen and the saansègè I was told there is a figure that is in charge of performing a sacrifice that asks permission to start the collective hunts and the fishing. Today I met a man about 55, called Sa-Sibiri Traoré. In Seenku he is called Juunsira (Juun=Bush, Sira=Master), in Jula Kungotigi (same meaning). There are other kungotigi in each Sambla village, but they all somehow are connected to his family. It would seem there are similar roles among the neighbouring Tusia and Bobo. He speaks in Jula slowly, for me to understand, and explains that what he does are sacrifices that are related to the bush, one before the tèen, one before the saansègè. There are two different places for these sacrifices, and he uses the word son rather than saraka, which is related to a sacrifice to reveal acceptance (son) rather than one that is performed to share food and receive blessings (saraka originally means alms). The one for men is at the limit of the village, the one for women is far and hard to reach. Without a positive outcome of the sacrifice, the two forms of hunt cannot be done. The other reasons he can make a sacrifice for are a decease in the bush, for relatives of the dead have to wait his ok before they bring the body to the village, or the case that someone is caught having sex in the bush. In this case there is a fine, often a ram, that is sacrificed.

I ask who or what he addresses his sacrifices to, he laughs and says that I want to know many things, leaves for a moment and comes back with a sort of ball covered in feathers and blood. It is called Nyuma, it is a jo (Seenku dji), something that the French call fetiche and in English has been called power object. He says it is passed from father to son, since the ancient times his family used to live in the bush. Then the dugutigi came to visit them because he thought that the jo they had could work for the good of the village, and asked that they come to settle in the village. The ancestor refused, but the dugutigi insisted. The ancestor said that the things they would bring to the village have many tana (roughly I can translate this word as taboo, but it is originally a totemic animal, in Bamana tné), and the dugutigi gave his word that he would make them be respected. If I understood properly, the ancestor was worried that coming to the village he would lose the authority to make the interdictions be respected, and needed the dugutigi‘s collaboration to have them respected. The first jo I have seen, Nyuma, receives the sacrifices for the tèen and the saansègè, and it is necessary for the rain to come. I also ask about the figure of the sanjitigi, who is incharge of performing sacrifices in case of lack of rain.  He specifies that the sanjitigi cannot do anything if Nyuma didn’t give the green light first. Another thing the kungotigi does is to be the warden of all things that are in the bush (says mara, so tigi rather than “owner” or “master” is to be interpreted as “warden”). This is why if something is stolen in the bush it is one of his jo to kill the thief. He goes to fetch it to show it to me: it has the weight of a stone, about 15cm long and 5 wide, also covered in feathers and blood. I think to a remark Lasso made in September, on why it was safer to bring his hens to his field, where they were less likely to be stolen. He said people know that if they steal in the bush they will die in a couple of months. The kungotigi is also the warden of kungosogo, bushmeat, so he can take measures whereby donsow will not find any animal anymore.

I mention in a certain period, around the Sixties, when in Karankasso many things like his jo were thrown away by converts to a modernist form of Islam. He replies that his jo are too important because of the rain. They cannot be discarded. It is important to understand that these references to the rain are ways of saying that he is indispensable, for survival here is really based on the coming of the seasonal rains, which make possible subsistence agriculture.

Thekungotigiis a role that is passed from father to son, he has no forced residency but in case of his absence rain wouldn’t come. He also adds, pointing at two boys behind him, that he will teach everything to them so that they can continue with this role. I ask a woman could become kungotigi, he says no because women cannot keep secrets (this is a reason that often also motivates the exclusion of women from donsoya). The kungotigi has three tana: jaba (onion), soumbala, and he cannot touch his jo without washing after having sex. Again tana related to the body of the owner, two are related to aliments. There are similar ones that are related to hunting jo as well, and it seems this kind of objects could be relevant to my research for its embodied connection to their owner.

This first chat left me with more questions, so I will come back to Sa-Sibiri soon. I ask to photograph him, and he picks up Nyuma to pose with it. 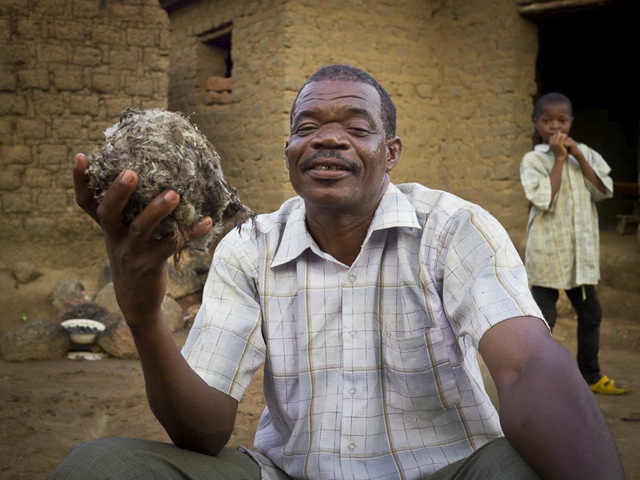