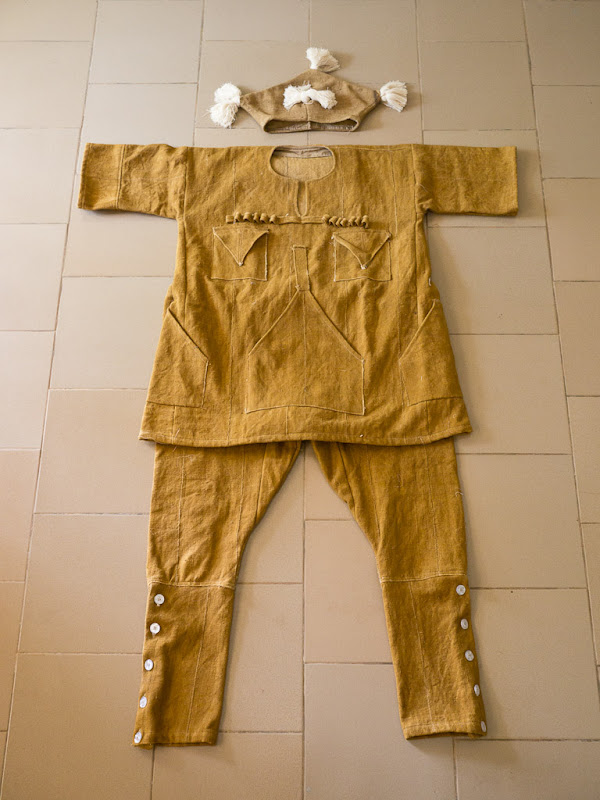 This is, so far, perhaps the post with the longest preparation I put together. I started gathering material in October 2011, and now can say I have more or less assembled all the materials I needed. Its focus is the characteristic uniform of the donsow, a powerful means of identification recognised by both initiated members and mogo gwansang, normal people. I think I’d start with a comparison of my experience with the only text on the topic, to my knowledge: Patrick McNaughton’s The Shirts That Mande Hunters Wear. One of the things that struck me in the article was the way the author mentions only briefly the way hunters dress during the actual hunting activity, to concentrate on parade and ceremonial uniforms. According to my teacher Adama Traoré, ever since he was born he was told that a donso should have two outfits, one for hunting and one for ceremonies. But both are donsofani (literally “hunter’s suit”), and share the same cut and sometimes dyeing. McNaughton correctly moves on to describe the amulets that sometimes cover ceremonial shirts, making them visually striking. But amulets are used on bush uniforms as well, they are just different: to go hunting we are more likely to hang to the front eyelets of a shirt protections from snakes or other dangerous animals, or from metal objects like blades or balls. There are also amulets that facilitate hunting, like a fereké (literally “hitch on”), that prevents an animal from running away. On a ceremonial donso shirt we are likely to see amulets that protect from envious people or that make the wearer more appealing. Nonetheless, there are many amulets you do not see, like tafu belts worn on the waist under the clothes, or some sewn inside the fabric of the shirt itself. Wearing many amulets in public might not be a good strategy, for somebody might think to test the power and knowledge you are so openly displaying. 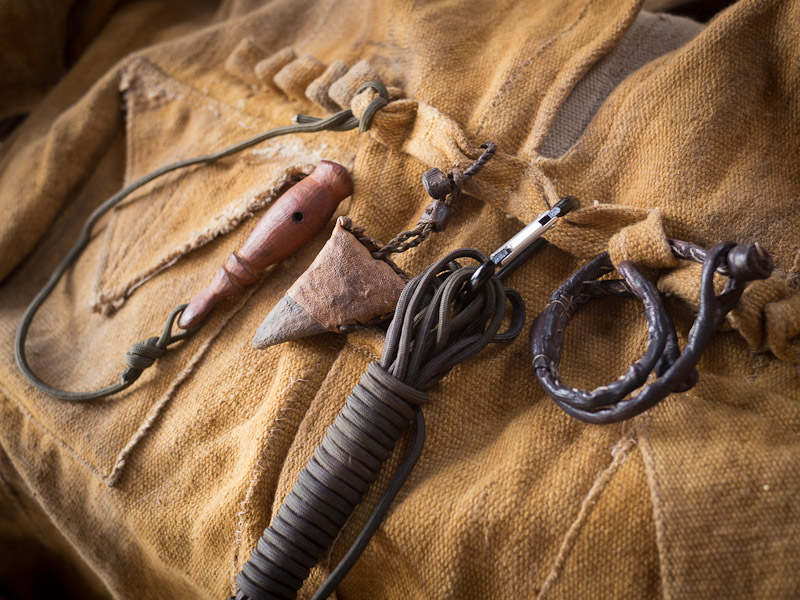 There is a visualist bias, I believe, in McNaughton’s analysis, that make him describe a donsofani as an exhibition of amulets. The axiom whereby more amulets are found on a more experienced and powerful hunter’s shirt is false, at least here in Western Burkina Faso, see my teacher’s. Another problem I have with the statement that animal matter hanging from the shirt would show to observers the prowess of the wearer. Where I am conducting fieldwork a donsofani is not a trophy gallery, rather animal matter is used to contain vegetal or written preparations that often constitute amulets. Many of these are made from the horns of domestic animals, like for example goats or rams, or the hair of a black cat. Goat leather is often used, but  I have seen some amulets sewn in fish skin, for specific reasons. And even in case a wild animal is used, not necessarily the hunter wearing that amulet is the killer. It could have received the horns (or teeth) as a present, or inherited the whole amulet from a relative or teacher. In other words, donsow use amulets because they work, not to show off. 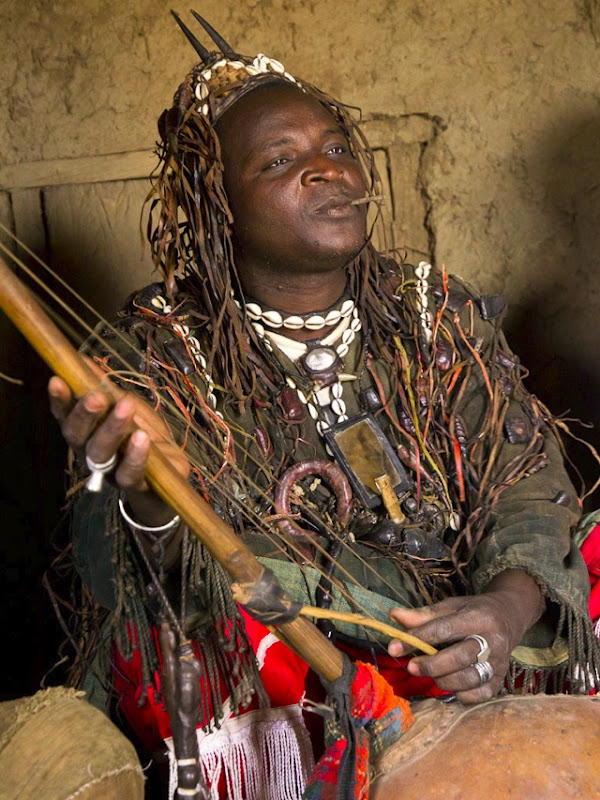 Reading McNaughton I think of an accomplished donso musician’s shirt, like for Diakari Traoré. Here all is hanging from the fabric is a display of prowess, that of a praiser who sometimes receives amulets in reward. Many of these, though, are self-produced and have as an aim the protection of the very exposed personality of the musician from evil and envious eyes (many include mirrors).

There more sensuous and practical aspects to the use of a donsofani. When I first wore it I thought the fabric was too hot for the climate. In fact I don’t wear it anytime I go hunting, mostly because of the heat. But the fabric has the undeniable advantage of being very resistant to the terrible thorns that seem to be everywhere in the bush of Western Burkina Faso, while on the other hand many of my lighter shirts are now all ripped on the sleeves. The dyeing is often based on vegetal extracts, sometimes decorated with mud. Colours so obtained are fragile, you can wash them away very easily. So, on the one hand, many donsofani are discoloured by sweat and the sun, as to reach a standard light brown, and on the other hand they are not washed frequently, if at all. This has as a consequence a characteristic smell I have no means to record. I often asked myself why the trousers are invariably slimmed down on the final part of the leg, with buttons. I received various answers, a hunter for example said that the slimming allowed to walk more silently when stalking animals, another that it would prevent the trousers from getting entangled in a bush while running. In any case, the whole outfit makes me suspect an influence of military uniforms, perhaps from World War I. Sure these days I have seen many that are cut from camouflage polycotton fabric. 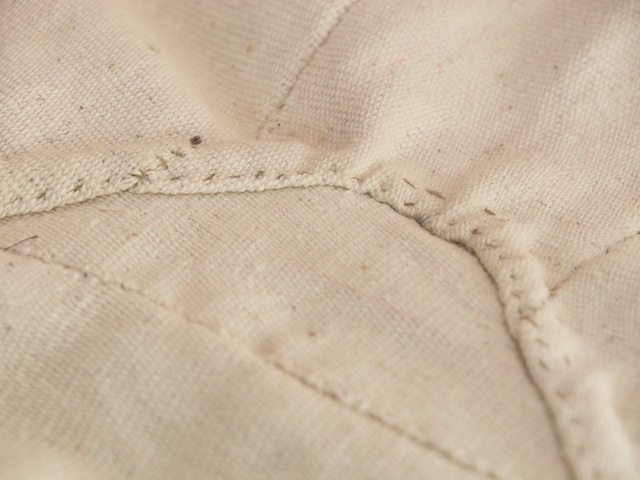 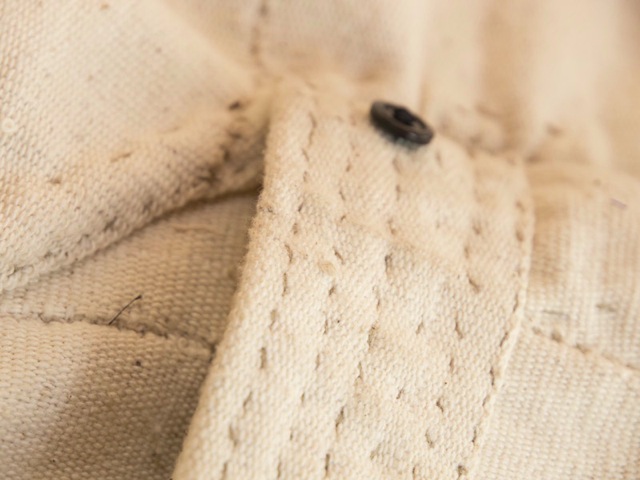 Soon after initiation I got myself a donsofani for hunting, from my tailor in Bobo Dioulasso who happens to be a donso as well. Then I asked my teacher how could I get a second outfit, to use at ceremonies, like his own. That kind of mud dyeing with the vegetal motif of leaf of the nere tree is common in the Kenedougou province and most Western Burkina Faso. I started from buying strips of white, rough cotton fabric: 50 metres. These are produced from a hand spun, locally produced cotton thread that is then woven in thin strips. This fabric seems to be associated with Muslim mystics that live in poverty, walk around barefoot and dress in white gowns made of the same cotton. It is often them who sell it near mosques, in big rolls. The fabric was sewn in Samogogwan, the trousers by old Bakari Traoré, who lives next to the family house of my teacher. He did an amazing job sewing them entirely by hand. The shirt was machine-sewn by a tailor, who characteristically added the large pockets in front and on the back, the mid-sized ones on the sides and the small ones on the chest. My teacher Adama can usually do the dyeing himself, but because he has a broken forearm, the job was passed to his junior brother Lacole. He first dyed the donsofani in an infusion of kerekete tree leaves, which resulted in a quite bright yellow tint. Then he gathered some putrid mud from a perennial stream, mixed it with some of the same kerekete infusion, and used a nere tree leaf to impress the motif. He told me their father’s donsofani was painted like that, and that he taught them the process. Once finished and dried, I washed the suit briefly, in simple water, and the colours changed to dark grey on light grey. 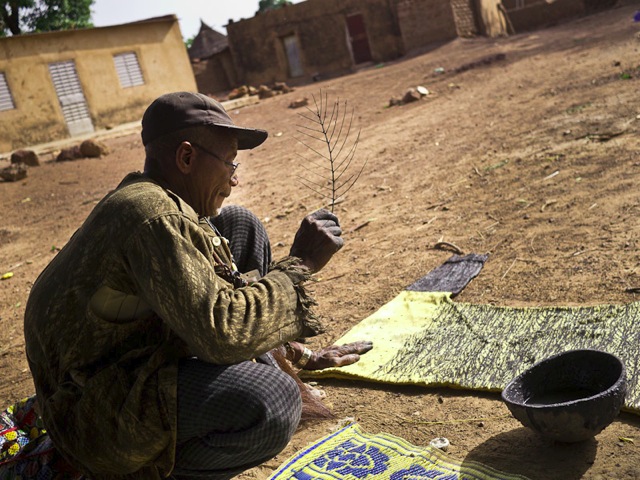 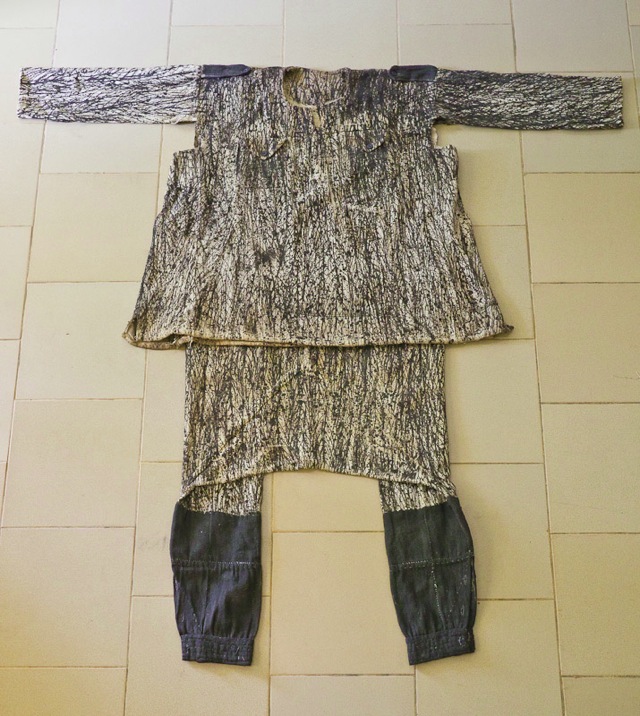 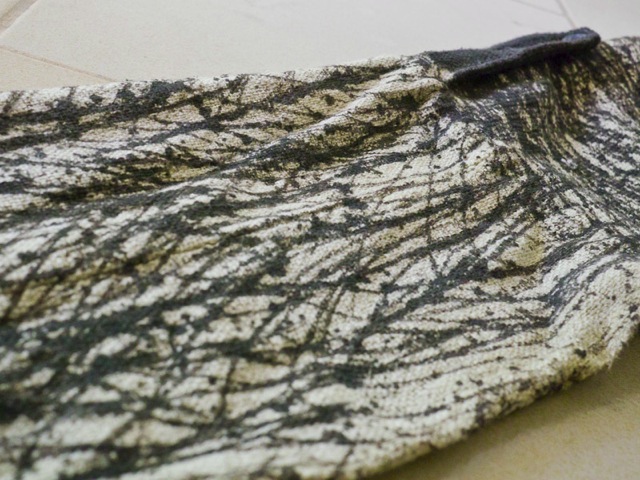 2 comments on “What a Donso Wears”