The Maana of Adama Sogo Traoré 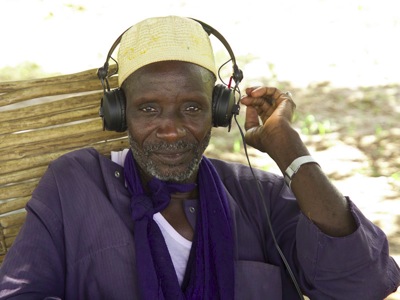 After about a week of delays due to the massive rain that keeps falling on my research area, I managed to have Diakari Traoré and Bakari Ouattara playing at the compound of my teacher Adama Traoré. My idea was to realise a special recording, that of the maana of my teacher, performed by his own son. Maana is a term that designs a chronicle of deeds, and in this area has the specific meaning of the praises of a great hunter, including the enumeration of his remarkable kills. I wanted to create a recording in a controlled situation, for technical reasons, but still trying to render the complexity of the acoustic space of the donsotulon, the dances of the hunters where the musician makes public the hunting exploits of some of the presents. I experimented myself this mechanism, when Diakari praised me after I killed my first big animals and brought to him some meat. The musician is then rewarded by money, secret knowledge or meat. Often these praises are dialogic, in that the hunter replies to the musician, and those presents underline his declarations with whistles and gun shots.

Thanks to the presence of Nicola Scaldaferri from the Leav at the University of Milan, I had the equipment to try to record such a complex situation. I put a baffle head with DSM 6S-H microphones in front of the musicians, keeping the singer in front and the accompaniment to the right side. On the left side I had my teacher sit, looking at his own son praising his deeds. This way he became part of the performance, and I hoped he would react and intervene. I used a Sound Devices 744T to record four more tracks, two Rode NT55 with cardioid capsule on the voice and instrument of Diakari, and a Shure VP88 dedicated to the accompanying donson’goni, voice and scratched metallic idiophone of Bakari and Mohamed Ouattara. Lasso Traoré was in charge of sound effects, shooting an old gunpowder shotgun and whistling in a donsofle. It will be a challenge to mix the complex and very different takes of those six sound tracks into a realistic product.

My teacher had told me he usually does not allow his son to perform his maana, because people would say that the son tends to be partial to the father’s qualities. In this case anyway he allowed, perhaps because he knew that the recording would go abroad to be hopefully published. The idea to record this maana was conceived by me and Diakari, when I told him that usually in Europe only the songs of the donsow are published, for those who cannot understand the words cannot really appreciate the almost spoken verses of the praises. His reaction was to say that if I wanted to record something different we would work on the recording to transcribe the text in a separate booklet, so that Europeans would understand. When I will have to transcribe this performance I will have to write it on two columns, though, because my teacher’s reaction to the praises was beyond my hopes. He kept talking between his son’s lines, telling of the origins of his family tradition, of his teacher and his father, and lamenting that now anyone can become a donso.
This fragment is recorded with DSM microphones in Sony PCM-D50 recorder. 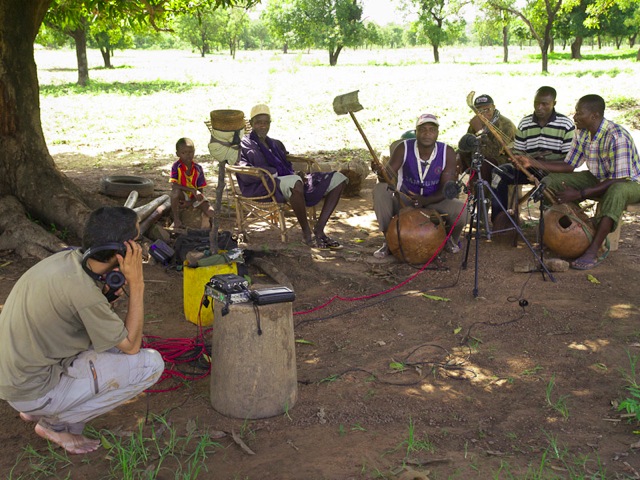