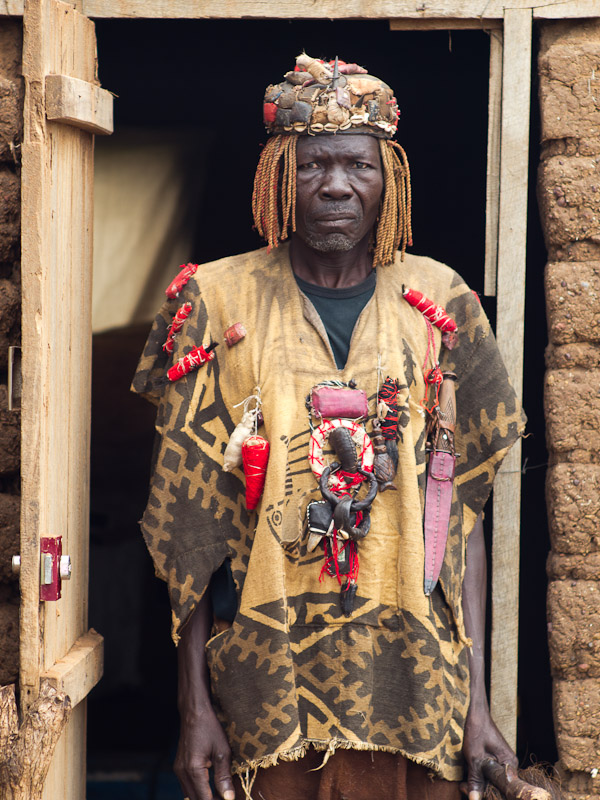 I first met Adama Woni in Banzon, in the house of Bakari Ouattara, the musician who played at my initiation. Adama is from the Dafing country, a village near the border with Mali, but spent most of his life in Banfora. He moved to Banzon in 2011, but keeps travelling all over Burkina. He is a professional of magic, sells amulets, medicines, and more. His room is his best business card, with all sort of medicinal powders in bottles laying on the floor, gourds hanging from the ceiling, amulets on the walls. I have to say he is very smart in the marketing of his products, for he is very generous in distributing knowledge in the course of every visit I make him, which is why I kept coming to his house. He could teach me five or six medicines in a day, give me some rare vegetal ingredient, and I would buy something from him as in a form of tacitly agreed exchange. One of the things he gave me one day were a few paper sheets from his chaotic ”archive”. I have to remark he cannot read, nor latin alphabet nor arabic, so he knows the use of every piece of paper by heart. This was transmitted by somebody else, in some case a scholar of qur’anic studies or somebody who, like him, is illiterate. He tells me the most precious and powerful ones he found in his native area (the Dafing or Marka people are mostly present in Mali, near the area of Islamic universities). Most of the papers he browses are Ala Togo (literally Names of God), arabic writings that are carriers of specific powers. I received five that day, promising to make photocopies once in Bobo Dioulasso, and return the originals to Adama.

Notice the power seems to reside in the content, and not to be connected to the act of writing, for a photocopy has the same power of a hand-written copy. I was even told photocopies are better, for they are immune to errors. One of the writings I received has to be copied to prepare Nasi water, to wash your hands with in order to prevent the money you gain from running out quickly. Another has to be fold and left under a heavy object in my house, to grant peace to the inhabitants. A small one has to be hang over the door, wrapped around the hair of a blind man, to work as an anti-theft that will disorient anyone picking up an object without permission, making him unable to find the door until he puts down the object. The final ones were a tangana, a protection amulet, and a sort of non return valve for my career, something that prevents you from regressing at any workplace. In many cases I notice something has to be added to the writing to activate it or to improve its performance: an ingredient with a sympathetic property (the blind man’s hair), the parasite of a tree for the protective amulet, gold and silver dust in the one aimed at career. I have chosen the latter two amulets to be featured in a video, that will become part of the film I am preparing to tell my apprenticeship of donsoya. Something that should not be overlooked is the final shape these objects take, for they are usually sewn in leather, and prepared to be worn on the body. Some can become belts to be worn under a shirt, or small packages kept in a pocket. A cotton thread is normally used to keep the paper well tight, and its colours are relevant to the function. My leather worker of choice is Moussa Deme, who hails from the same village of Adama, Jin. He is very skilled but his prices quite high. He tells me that he has to be well payed for his job is dangerous, the power of the things he deals with damages his eyes. Under his sunglasses he has in fact a blind eye, and a similar story I heard from a Bobo jeli family in Bobo Dioulasso. In many Mande peoples leatherworkers and musicians are the same figures, belonging to endogamic families. After filming Adama preparing two amulets, I helped him with the rest of the copies I had done in town.