Sounds of the Slaughterhouse 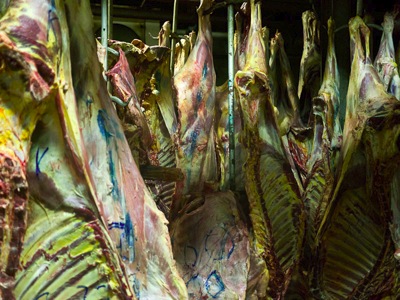 On nights like these I wonder why am I not just sleeping in my bed. It is cold as I drive following Norbert to the slaughterhouse of Bobo Dioulasso. At 1am we are in his minuscule office, Norbert Ido is the Adjoint of the Chef de Service Administration et Production at the Abattoir Frigorifique de Bobo. He keeps the office very tidy and underlines a few times that his superior will retire next year and he will take his place. Butchering at the abattoir is obligatory by law, even if in most villages in Burkina animals are killed and prepared at home. The structure is old, and it hasn’t seen many changes since it was established in 1962, but there are veterinaries who control animals as they are butchered, and a refrigerated room to store meat. Cows are reversed on their side, and their throat is cut. A mechanised system then picks them up and lets the blood run down a grid. Then bovines are transported hanging from the same hooks to be opened, examined by a veterinary, and butchered. Ovines are picked up by hand, while pigs are not cut at their throat but killed with a hammer, and put in boiling water for the hair to be scratched away. The price for slaughtering is between 2500 and 3500 CFA for each animal. In a given year, because of the protests of the muslim community, the slaughterhouse had to give up using a gun to kill animals (and subsequently cutting their throat), to give the task of killing to members of a family designated by the muslim community, who, after the animal has been reversed on its back, slits its throat.

This is why I am here, I am looking for analogies between the magical precautions to be taken when killing a wild animal and a domestic one. It all started when I saw a donso sacrificing a goat on the dankun. After cutting its throat, its eyes were covered by its ears. I asked why so, and was told that domestic animals as well have nyama. When a donso kills an animal in the bush, some sort of energy is liberated, which can harm the killer as for revenge. This energy is called nyama, and part of the abilities of a donso consist in knowing how to protect himself from it. My plan is to ask the workers of the slaughterhouse if they take magical precautions to deal with the death of massive quantities of domestic animals. So I go straight to the room where bovines are killed, to Soungalo Zon, a man about 55, a Samo from Nouna who is in charge of slitting throats. To my question he replies “if I were to say that I don’t take any precaution I would lie”. There is a procedure his father taught him, and his grandfather did as well, it avoids all problems. He doesn’t want to give any more detail, and I don’t insist. After we exit the room, Norbert adds that it is believed that the job can make people crazy, and that, while pregnant animals should not be killed, in some cases they don’t know until they open them. In that case the worker can give birth to malformed children, if he does not take any precaution. He points at an old man, hunched by age, his clothes so dirty with animal matter that I cannot tell what their colour originally was. Norbert tells me he is over a hundred years old (to me he looks about 75). His job is to gather foetuses, God knows who he sells them to. He is said to have a tafu belt with knots, he only knows the incantation for it. It protects from back aches. Norbert adds that he is also said to have never had a woman in his life (interesting for he deals with foetuses). While Norbert is busy with something I go to the old man and ask him if this job can give health problems, or harm the workers’ children. He replies simply “Look, I really don’t know” and leaves, in a way that means “I am not telling you anything”. I understand here that the kind of access I have with hunters is really exceptional, and that working in different environments cannot be as simple. People here do not know me, I am just a white man accompanied by a clerk, and it is not clear why I ask those questions.

Anyway, I am not hit by smells as much as I feared, but rather by sounds. There is the roam of the system that carries the carcasses of cows, the flush of blood and intestines, the cries of goats and pigs, the sound of the hammer that kills pigs and the blade that scratches their hair, the axe that opens the chest of bovines. Those sounds are almost as haunting as nyama is, especially if associated with the visuals that I omit here. The recording I prepared should render this hellish soundscape. As I get back at 4am, riding my motorbike in the cold, I am somehow happy with the night I spent in this infernal place, even if I am not sure how useful it will be to my research.
Recorded with Sony PCM-D50. 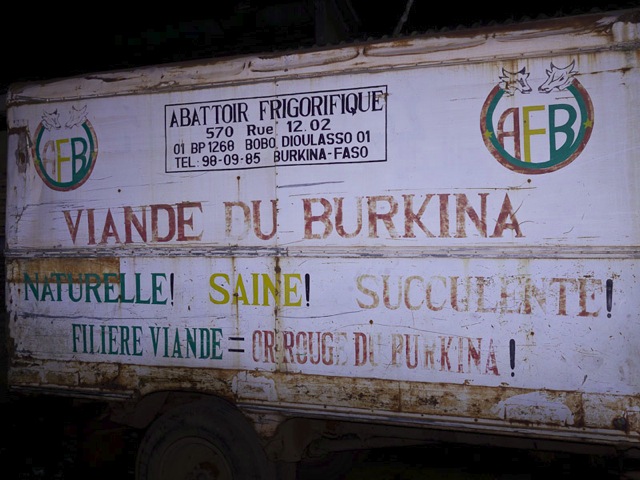