How to Make Things with Words 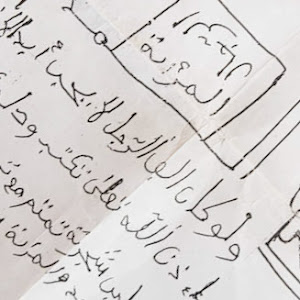 It all started a couple of months ago when Si-Juma Konaté, after we met for filming the building of the Sambla balafon, brought a photocopy to my hunting companion Lasso. Si-Juma described the piece of paper, that seemed to have been kept folded in a wallet for a long time, as a powerful arabic writing that could allow the right person, somebody with a knowledge of the Qur’an, to manufacture an amulet or a medicine. He didn’t say where or from whom did he get it, and we didn’t ask. The right person we found only today in Seydou Sidibe, a Peul scholar in quranic studies that happens to be living in Karankasso for a period, guest of a relative of Si-Juma. Seydou studied in Mali, in the renowned centre for Islamic studies of Jenne, and was able to read the writing and explain the possibilities it offered. If somebody’s name is inserted in the central square, he told us, the words can act to help that person in a direction of his choice. While there are writings that are aimed at specific effects, this one seemed to be flexible. Lasso asked for the financial means to start cultivating cashew, as an investment.

Seydou said he was able to help, but asked a disproportionate sum. At this point it was not clear to me what he was materially supposed to do with the piece of paper, but I said that spending too much money in order to gain some money in the future was beyond my cultural relativism. Later we settled on less than a tenth of the initial request, and I agreed to sponsor Lasso if Seydou allowed me to film whatever he would be doing. The answer was positive, so after dinner we all gathered in Seydou’s room to assist to the process. He started to copy the sheet on a wooden tablet, and once finished checked carefully the text. Then he washed the ink with some water, that he kept in a metal container. He repeated this process ten times, and took about three hours to complete it. He barely spoke, and Si-Juma and Lasso fell asleep. I filmed, and provided the lighting with Si-Juma’s help. Once finished, Seydou added saffron, used here as a perfume, and a herb with a peculiar smell, called in Jula timi-timi. This water, that he called Fawzul Azimi Nasi (I had heard before speaking simply of Nasi), is used as a preparation to wash with. I already came across many hunting medicines that are assumed this way, it would seem like the skin is considered a permeable surface and the evaporation of a liquid on it entails the absorption of certain substances.

One of the most interesting aspects of these practices, along with the use of quranic writings sewn inside leather amulets, is that writing is not used as a vehicle for meaning, but as an ingredient with determinate properties. In other words, it a carrier of power rather than meaning. I will try to go deeper into this kind of practices.

2 comments on “How to Make Things with Words”