Another Way of Hunting, or Meat for Christmas 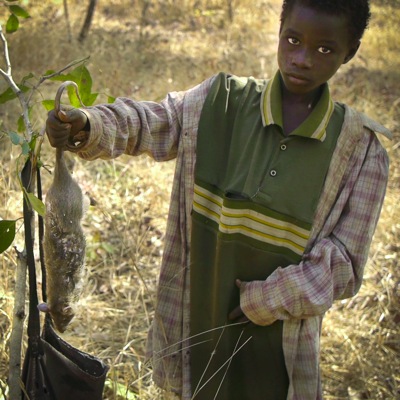 So it is the day before Christmas, both my friend’s shotgun and mine are being repaired and we have no meat for tomorrow. I could buy yet another hen, but I am frankly tired of being a hunter who buys overpriced chicken. Around December they reach three or four times the normal price, and I already bought a few for some sacrifices. So what do you hunt if you don’t have a shotgun? There are other ways of hunting, but they are not part of donsoya. Donso hunting is only with a shotgun, I learnt. Every donso in Karankasso owns one, even if sometimes it is an old gunpowder one. But not all hunters with a shotgun are donsow, (marifatigi bèè te donso ye), nor is it forbidden to donsow to practice other forms of hunting. These include placing traps, hunting in groups with wooden sticks, using slings and digging burrows.Today we are going to dig the holes of toto, in French rat voleur, Gambian pouched rat (Cricetomys gambianus). It is a big rat who eats bush fruits or, more often, steals in the villagers’ fields. It inhabits the nests of a kind of termite, often at the base of trees, widening them and connecting galleries. You can tell some holes are inhabited by toto looking at the margins of the hole, if they are smoothened by its passage. But it is not easy to understand the direction you have to follow, nor if the rat is hiding at the end of a tunnel or if nobody is at home in that moment. Also, digging the dry earth of this season is tiring and the rat bites if you try to stick your hand in the hole. But its meat is very tasty, I tried some from a rat we found killed by a vehicle, while coming back home from Banzon one night.So we organised an small expedition to find meat for Christmas. I went with Lasso, my usual hunting companion, his relative Togo-Omar, and little Pénnéguê (all family names are Traoré). The boy is coming with us because he owns a special dog. She is called Tulama, from the Jula sentence to Ala ma, leave it to God. Togo-Omar said he would never go hunting toto without that dog. The advantage of having such a dog is clear from the beginning, she smells the presence of the rat and tells you where to dig by perceiving its movements underground. So you avoid breaking your back digging empty holes.

We wake up at 6, and drive for about an hour to a place called in Jula Lafiela. We walk in the bush until 16, stopping only at noon in a Peul compound to get water. At the end of the day we gathered some 17 rats, and we burn and share them before reaching Karankasso. We eat livers, lungs and tails roasted on the fire, with salt and hot pepper. We didn’t touch food for the whole, tiring day. They taste so good, and we know there will be meat for tomorrow.

Video contains images of violence against rats. Not for vegetarians.