Nicola Scaldaferri, researcher in Ethnomusicology at the University of Milan, visited me in Burkina from late December 2011 to January the 20th, 2012. We spent a very intense week in Karankasso, trying to make an idea of the musical richness of the village. We filmed the construction of the baan, the Sambla xylophone, starting from the cutting of the tree. But I wanted to make sure we did not neglect other musical forms, perhaps not as stressed from the identity point of view as the baan. The outcome of those days surprised both of us for the richness we encountered.

I am told genies love the sound of this instrument. It is called kwèn in Seenku. If you leave dust on the ground at night and play the musical bow you’l find their traces the morning after. Go-Seydou Traoré, who is playing this piece, remembers seeing the instrument since he was 6, and learned to play it once 12. It is said to be very old. The song is called Fanka (power, strength in Jula), and has a text that can be sung. It tells of a time there was rivalry between Bobo and Sambla people. It says that if a Sambla couldn’t kill a Bobo, he would wound himself and drink his own blood. Now the two people are senanku, or in a joking relationship. They insult each other ritually and nothing more. Recorded on 8 January 2012 with Rode NT55 to Sound Devices 744T. 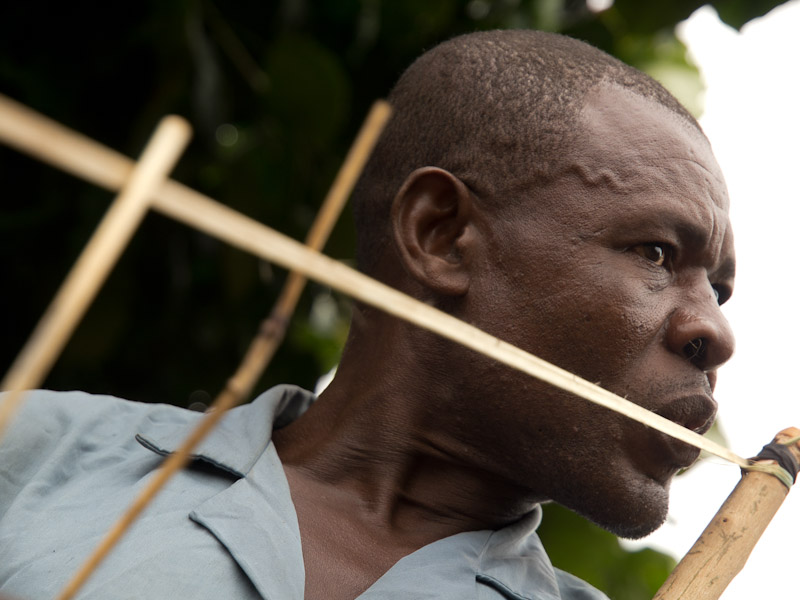 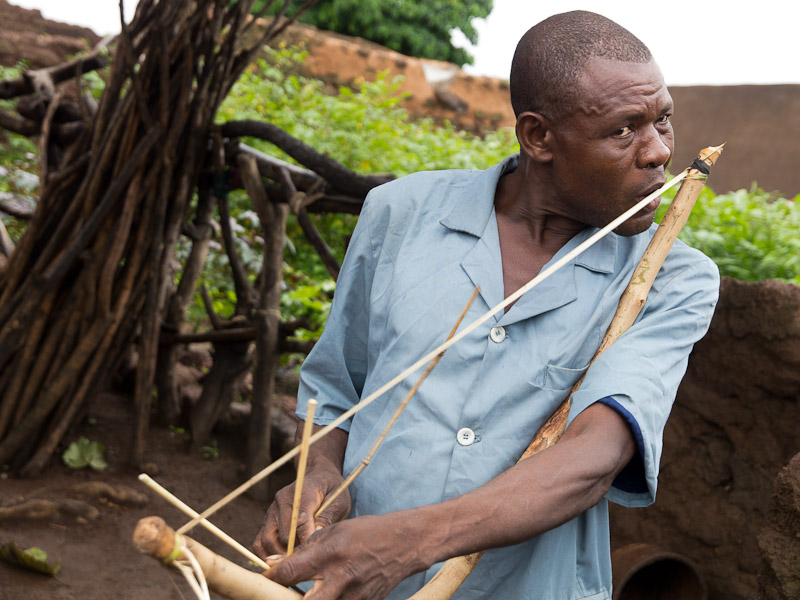 This song is called with by the name of a genie living on a hill, who supported the Sambla at war. The text describes again the rivalry between Bobo and Sambla, the latter made slaves out of captured Bobo. At the time there was a very red variety of sorgho, and the to women prepared was all red. So when a Bobo saw some red excrements, he would run away from fear that a Sambla was nearby. To show their fanka the Sambla would cut an ear to any captured Bobo. Fie-Sebekadzene Traoré, who is playing the flute tells me today it is over, Bobo come to Sambla funerals, we are all one people today. The name of the little flute is piòn. Fie learned playing it while herding animals, from other herders. It used to be made with tnin (in Jula bwò), the kind of bamboo often balafon frames are made of, but now it is generally built out of a plastic tube. Fie’s sister Jie-Nekoro is singing. Recorded on 9 January 2012 with Rode NT55 to Sound Devices 744T. 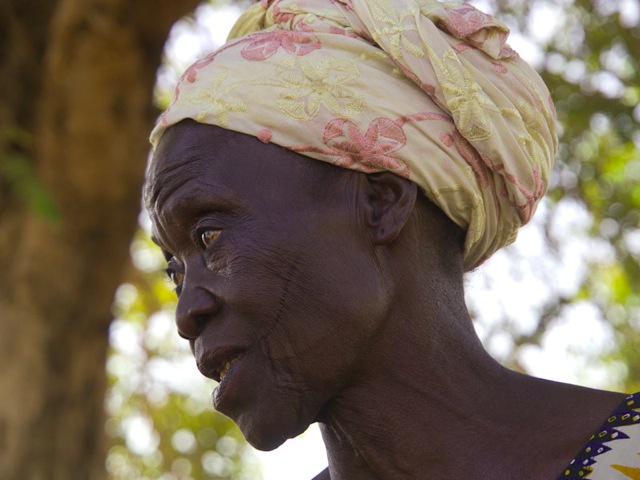 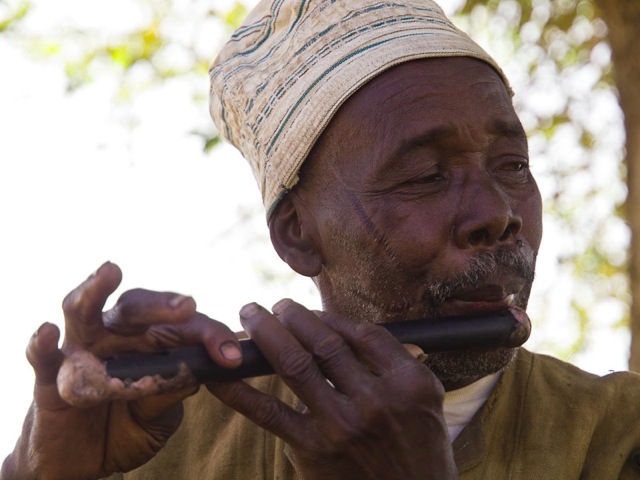 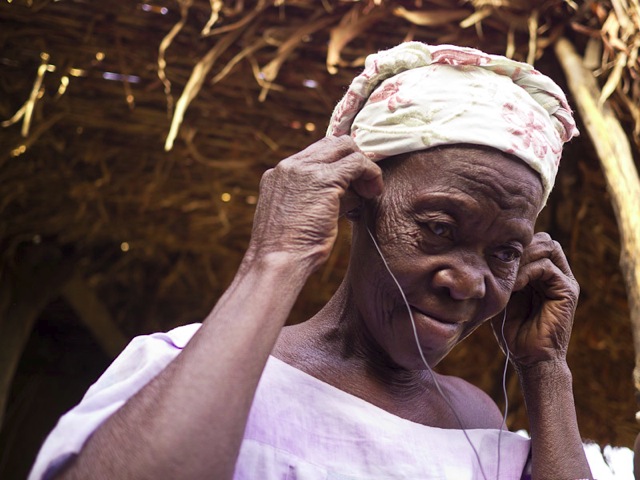 The Sound of the Mortar

All through Burkina Faso it is common to see women grinding millet or corn in big wooden mortars, with long, heavy pestles. Sometimes they let the pestle fly, clapping their hands while it is in the air. While it is possible to pay and have the grains piled at the diesel mill, a great del of work is still done at home by hand. On 12 January 2012 we recorded three women, using DSM microphones to Sound Devices 744T. 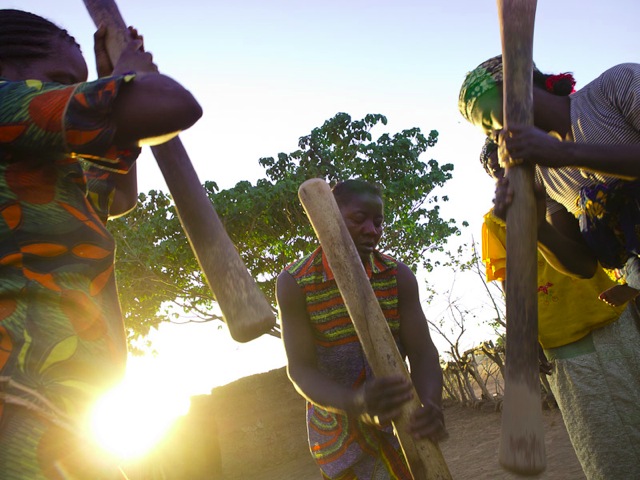 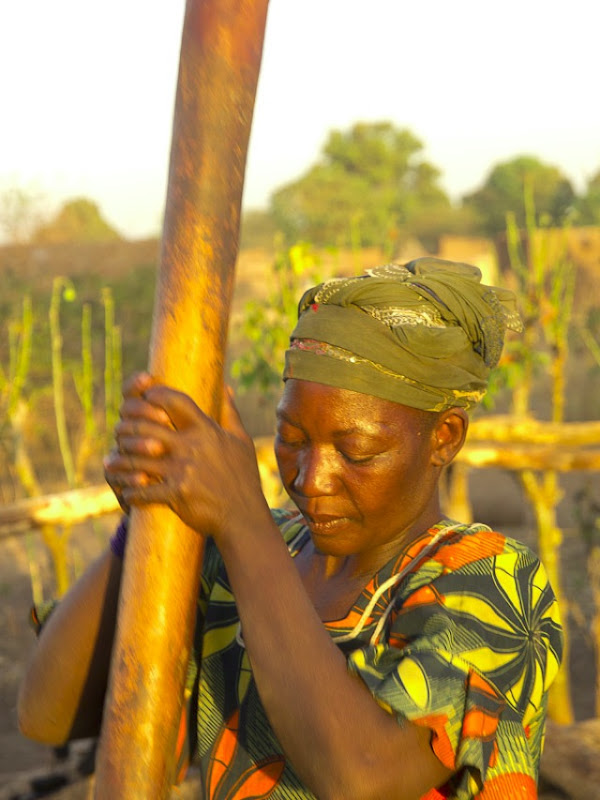 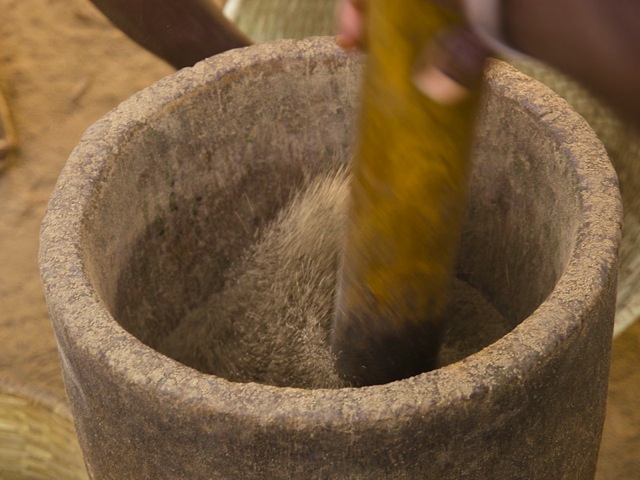 Nyi-Tonkono Traoré, Fene-Koro Traoré, Sere-Sini Traoré took their old millstones to perform this song. Although somebody still uses the stone for small jobs, like preparing peanut paste or soumbala, generally it doesn’t see much use today. The text says that the women with their work association will go to harvest in George’s cotton field. If at night the work isn’t finished, he will cut a tree’s branch to beat them. It is a nice detail that they referred to a person existing in the village, in a mocking way. Millstone songs often used to be a space for women to improvise on their frustrations and desires, to have a freedom of speech they didn’t normally enjoy. Recorded on 11 January 2012 with Shure VP88 to Sound Devices 744T. 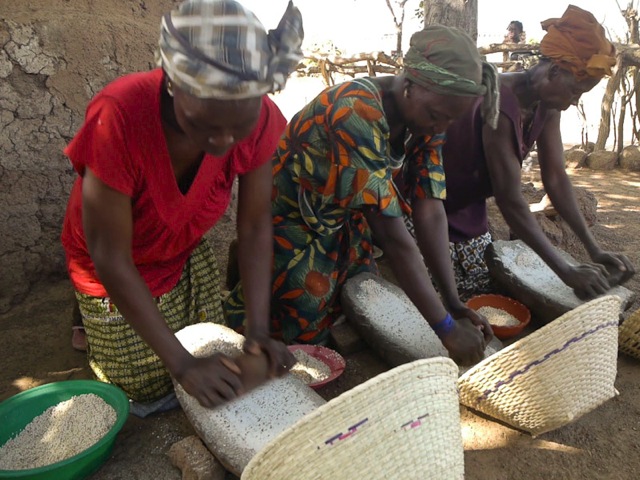 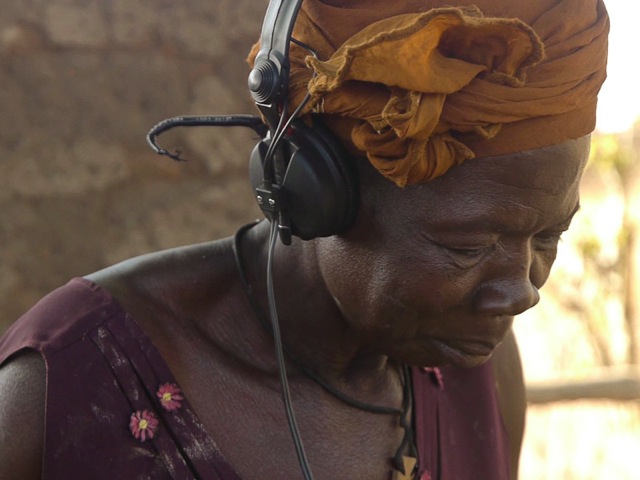 The first part of this recording, in Seenku, says that in every village there is a chief. If a stranger comes, you have to take him to the chief, and he will determine where he will sleep. Its title is Mangandon, something like the heredity of chieftainship. There is then a second part, in Jula, called Karankasso Mansaya, who says a chief has to keep his position, not reply to insults, for nobody else can take over his responsibilities. He must know that nobody out of the family of the dugutigi, the village chief, can take over, even if he has a lot of money. It is sung at the funeral of a massace, a member of one of the founding patriclans, and can be played on the baan as well. Togo-Dramane “Cegwe” Traoré whistles, and Sa-Vincent Traoré sings. Recorded on 11 January 2012 with Rode NT55 to Sound Devices 744T. 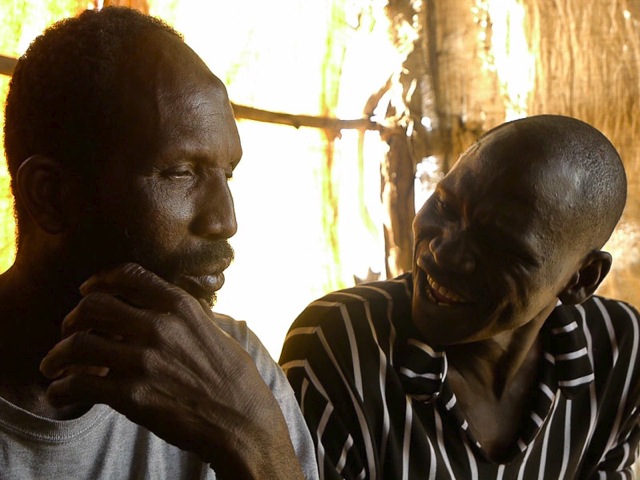 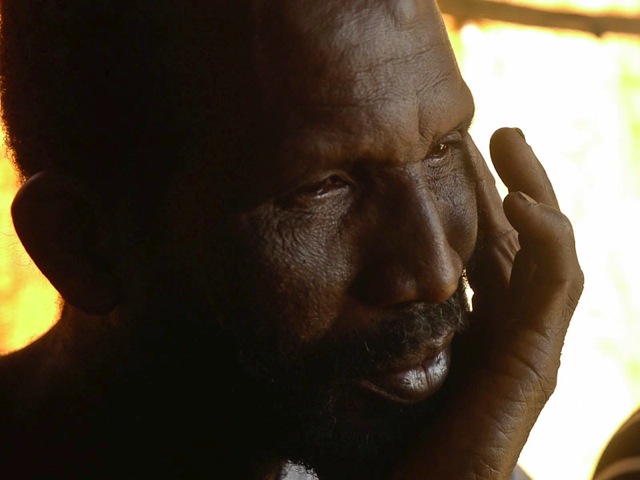 Jie Ouattara was buried on January the 13th. At the night the celebrations included this piece, called Jamatigi (in Jula). It is the hymn for Si-Boro Traoré, called here a slave master, the one who selected slaves for tapping dirt roads. In fact under French colonial rule, Si-Boro was chef de canton from 1915 to 1919, collaborating with French colonial forces in controlling the unruly Sambla. The song is played by Si-Juma Konaté for the descendants of Si-Boro (coming from from Bwende, a nearby village) to dance, calling them and asking 10000 CFA with the notes of the xylophone. When the music stops someone from that family replies that they are many and normally would give something around 50000, but since he asked 10000 only they will give that amount, so play along. Si-Juma starts with the same motif, I fade. Middle accompaniment is played by Sibiri Konaté;  bass accompaniment, Kue-Brahima Konaté, Longa Adama Traoré and Yacouba Traoré. Recorded on 13 January 2012 with Shure VP88 to Sony PCM-D50. 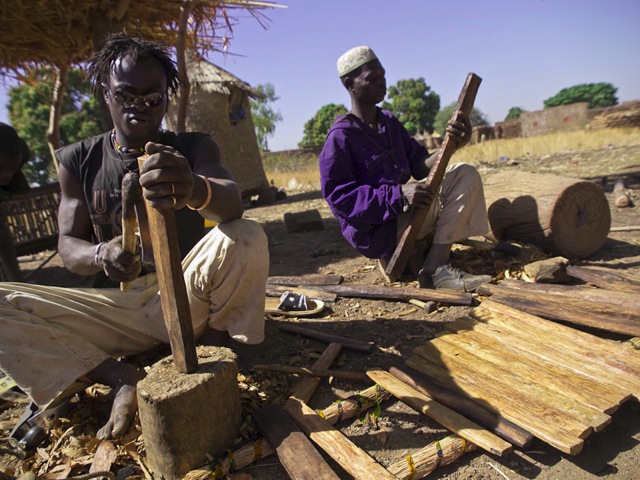 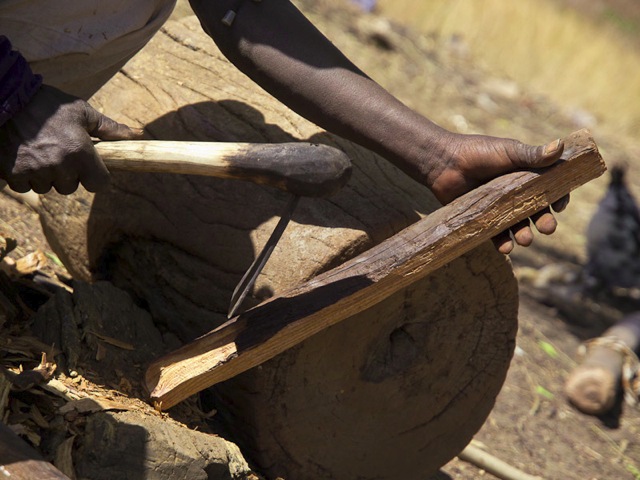 Back to Portfolio
A Migrant’s Tale
Interview with Steven Feld
I use cookies to ensure that we give you the best experience on my website. If you continue to use this site we will assume that you are happy with it.OkPrivacy policy