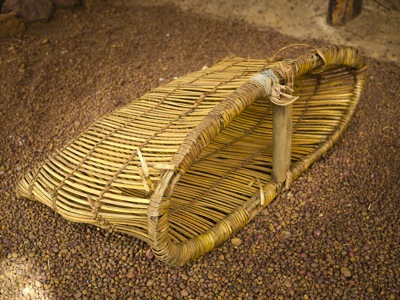 In a previous post I wrote about the annual collective hunts that involve the male population in Karankasso, during the dry season, and after the ritual of the kurusa. For women it is forbidden to participate to the tèen, even to go into the bush in the direction the hunters will take. The tèen concludes with the period of the annual funerals, roughly corresponding to the month of March. Once they are over, but sometimes with a little overlap, women start to go fishing in groups. Unlike the men’s hunt, there is no division in turn for each neighbourhood, but they all go together. It is also allowed to men to participate to the saansègè, the way fishing is called in Seenku. But there are as well aspects in common: the same figure, called in Jula kungotigi, makes a sacrifice to ask permission for both forms of “animal gathering”. Another interesting similarity is the technique women use: just like men in the tèen, they use their number to surround fish pushing it to look for a way out in one of their baskets. Because water is very muddy, in the streams near gardens where the saansègè takes place, women look for fish using the hand that doesn’t hold the basket, trying to hunt it out of the many bushes surrounding the shores. Another technique sometimes used is to delimitate a trait and empty it of the water. In this case the catch is shared. I just add that there is a good probability of coming across snakes, during the saansègè, but I was told that women should not fear and support each other. If they catch a snake in their basket, they just throw it away and continue. This is my short walk among them.